Azure Static Web Apps recently introduced the ability to automatically configure an Azure DevOps pipeline to build and deploy your app. It's a great way to get your app up and running quickly.

For production applications, it's common to first deploy an app to staging environment(s) prior to deploying to production. In this article, we'll walk through how to configure a robust Azure DevOps pipeline that will:

We'll use a .NET 6 full-stack application.

To follow along, import the repository into your Azure DevOps project. You can use similar steps for a Node.js app.

Check out the code at: @anthonychu/swa-devops-pipeline-demo.

You can create a static web app and the deployment pipeline in a single step.

When you create the app, a new pipeline YAML file will be created in the repository. It'll automatically run. It takes a few minutes to build and deploy the app. 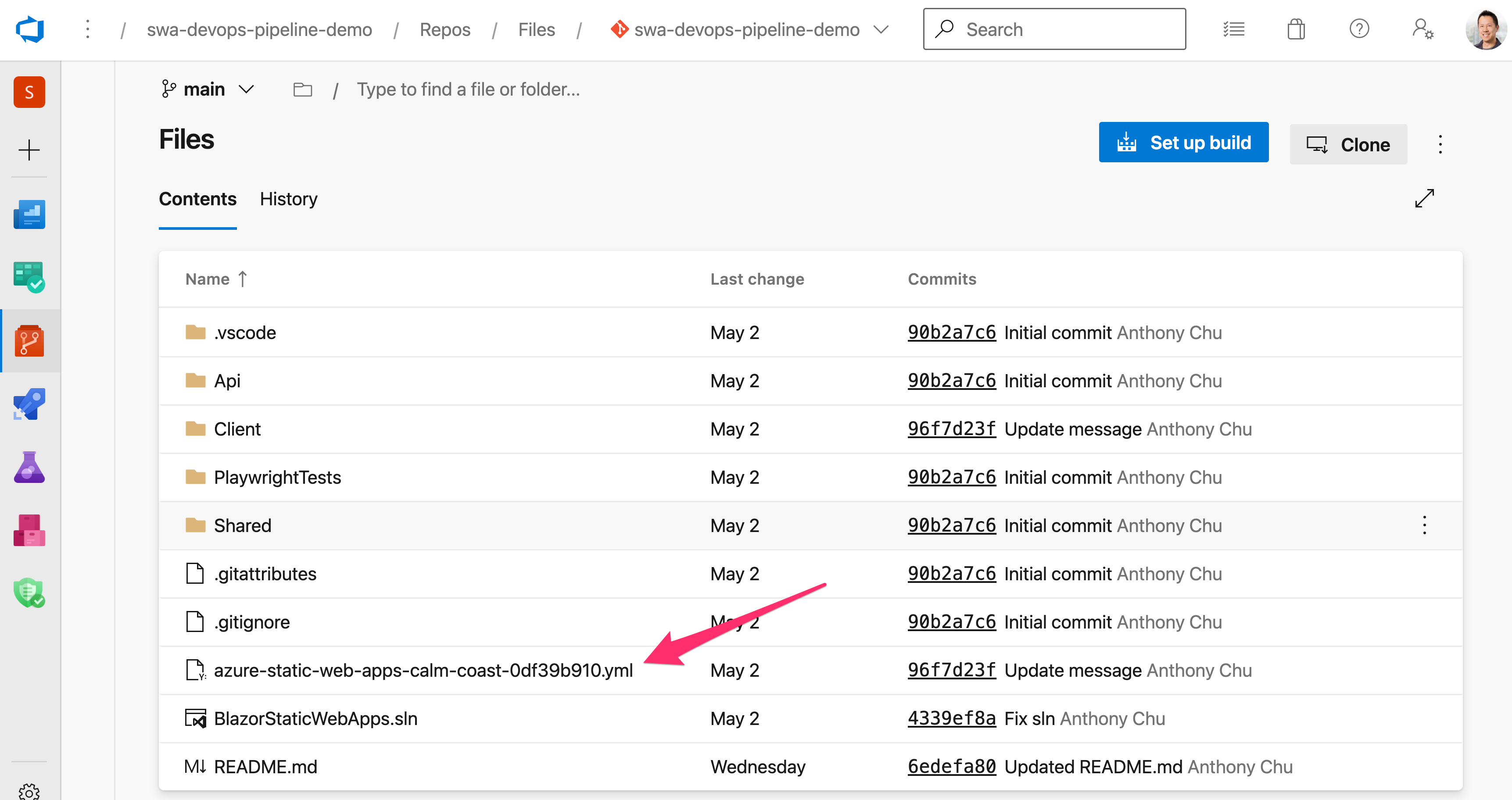 Open the pipeline YAML file in your browser or locally in an editor to see its contents. It contains a single AzureStaticWebApp task that automatically builds and deploys the app.

Azure Pipelines allows you to define environments. Environments are useful for adding manual approvals to your pipeline.

To create a Pipelines environment, select "Environments" under Pipelines. 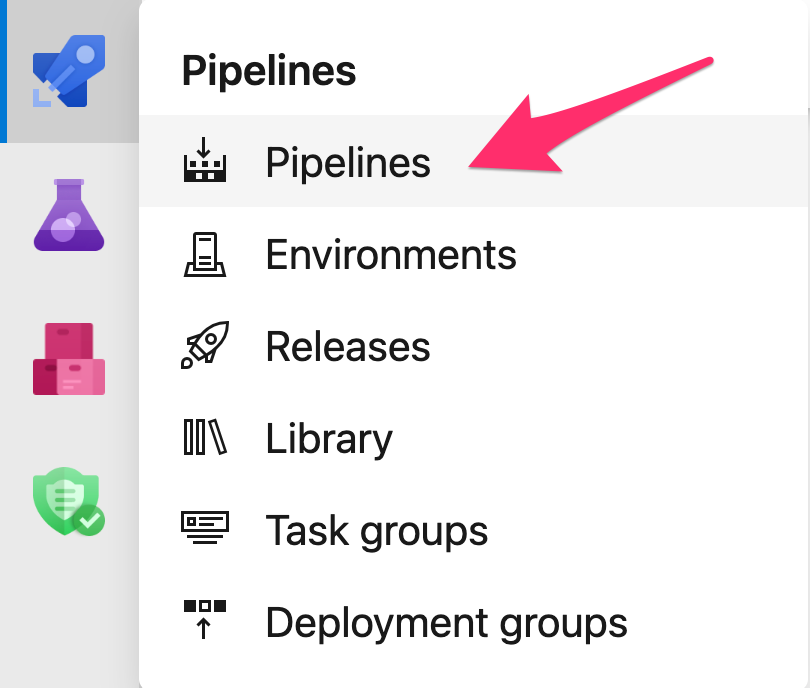 Create one named "Staging". Because you don't need a manual approval for this stage, you don't to configure anything else.

The pipeline you'll update later will reference these environments.

Azure Static Web Apps provides preview environments to let you test out your app before deploying to production.

Preview environments are public by default. This is great for open source projects, but sometimes we want to protect them from public access.

You can add password protection to your app's preview environments.

You also have the option to protect all environments. But in this app, we want the production environment to be accessible to the public.

Now that we've configured the Azure Pipelines environments and password protection, we can configure the pipeline.

Open the pipeline YAML file in your browser or locally in an editor. Replace its contents the contents of this file.

We'll walk through the different parts of the pipeline. It has 3 main stages: build, deploy to staging, and deploy to production.

The pipeline triggers on any changes to the main branch. If your app uses a different branch, you can change it.

The pipeline then builds the app, Azure Functions API, and Playwright tests. It then outputs the artifacts. The same build artifacts are deployed to all environments. This ensures that the app you tested in other environments is the same one you're deploying to production.

This stage starts by downloading the artifacts from the build stage.

Next, it uses the AzureStaticWebApp task to deploy the app to the staging environment.

After the app is deployed, the pipeline installs the .NET SDK and runs a script that installs the required dependencies for Playwright. Playwright is a testing framework that automates running tests in a browser.

After the dependencies are installed, the script runs the Playwright tests using the dotnet test command.

The last step in the stage publishes the test results.

This stage references the "Production" environment in the Azure Pipeline. Because we configured this environment to require approval, this will trigger a manual approval step before this stage is run.

Like the previous stage, this stage downloads the artifacts and deploys them with the AzureStaticWebApp task. This time, no deployment_environment is set because we want to deploy to the production environment of the static web app.

Now that the pipeline is set up, you can run it by saving the file. If you edited it locally, don't forget to push it to your Azure DevOps repo.

After the "Deploy to staging" stage is run, you should see that the Playwright tests have been run to validate the staging environment and the results are published.

The pipeline run is paused because the "Deploy to production" stage requires an approval.

After approval, the app is deployed to production.

Before we end this article, we want to dive a bit deeper into the Static Web Apps environments and the Playwright tests.

To see the environments you've created, click your static web app's "Environments" tab in the Azure portal. You should see the production and staging environments. 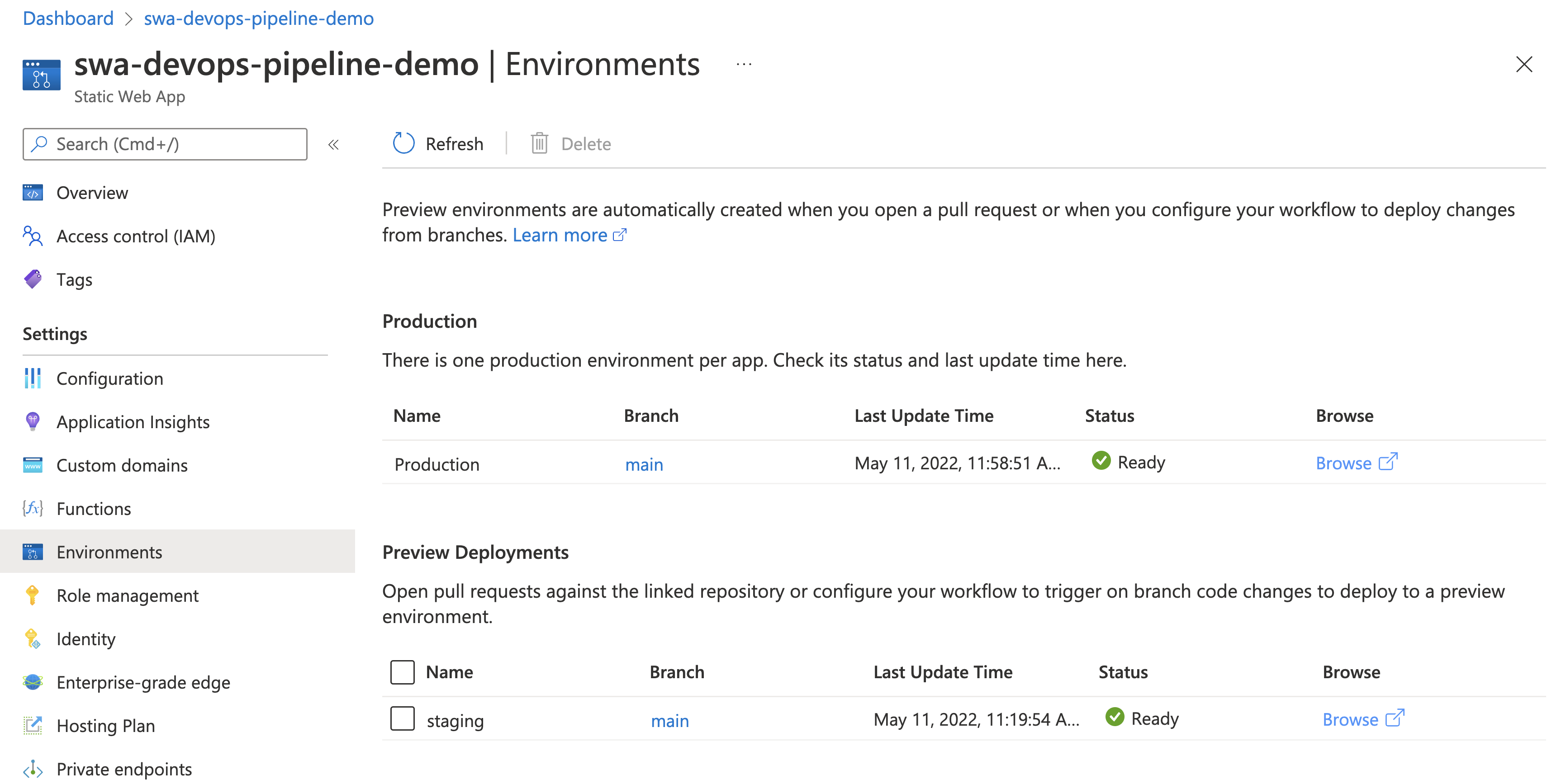 The Playwright tests are located in the PlaywrightTests project and they're written in C#.

Playwright can be used to automate testing of web apps using real browsers. The tests in the example use Chrome (Chromium), but Playwright also supports Firefox, WebKit, and Microsoft Edge.

This is an example of a Playwright test in C#. It navigates the browser to the app's homepage, clicks on the "Fetch data" link, and confirms that the data is fetched from the backend API and it is rendered successfully.

Another interesting aspect of the tests is the following code for navigating to the homepage:

This code automatically logs in to the staging environment if the browser session is unauthenticated. At run-time, the sitePassword variable is set to the value of the LOGIN_PASSWORD secret variable.

With the addition of features like named preview environments and automatic pipeline generation, it's now possible to configure complex, robust pipelines for building and deploying to Azure Static Web Apps from Azure DevOps.

The demo uses a .NET 6 full-stack application with a Blazor WebAssembly frontend, an Azure Functions backend, and integrated Playwright tests.